Now, you can sell failed startups online at Indiabizforsale.com

Indiabizforsale, a platform for selling small and medium-sized businesses, is seeing a spate of listings from small startups that wish to divest a part of their business or cash out entirely as entrepreneurs hope to see some return from the code, application or platform they have built even as their ventures didn’t succeed.

“When we began, it was mainly SMBs, but now we are seeing listings from even startups, either to sell some intellectual property or sell their platform because they don’t have the money to take it further, or are moving to do something else,” said Bhavin Bhagat, co-founder of Indiabizforsale.

The platform acts as a listing service and works on a subscription model for people who choose a premium listing. Indiabizforsale currently has over 20 listings for the sale of ecommerce-related businesses on the site, from different states including Uttar Pradesh, Rajasthan and Gujarat.

The reason given for intended outright sale or sale of some intellectual property in most listings is that the founders lack the money to scale up further. 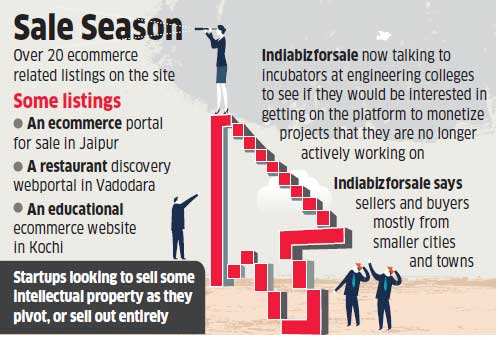 The potential buyers, like the sellers, also come from outside of the large metro cities, according to the platform’s co-founder Bhagat. “A lot of the people who show interest come from the smaller cities and towns. They have money to invest or they have run another business and want to diversify. The buzz around e-commerce makes this attractive for them,” he said. Read Full Coverage Here…